Fabsorbent™ F1P HF is an adsorbent with a synthetic ligand which can be used as an alternative to Protein L for the capture and purification of antibody fragments including monovalent antibody fragments (e.g. Fab, F(ab’)2, scFv), engineered antibodies and single domain antibodies.

Papain, a cysteine protease, is used to hydrolyse peptide bonds in the hinge region of an antibody. This results in the generation of two Fab fragments and one Fc fragment from each antibody molecule. This is a commonly used technique to prepare Fab fragments from whole IgG.

In this article, we describe the capture and purification of Fab fragments from a papain catalysed digest of human polyclonal IgG using Fabsorbent™ F1P HF.

Bound protein was eluted using an elution gradient from pH 7.0 to pH 3.0 and fractions collected and analysed by SDS-PAGE.

The non-bound protein was removed by washing with equilibration buffer. The Fab fragments were selectively eluted at pH 4.0.

Fabsorbent™ F1P HF is hydroxide stable and was cleaned with 0.5 M NaOH.

The conditions are summarised in the table below: 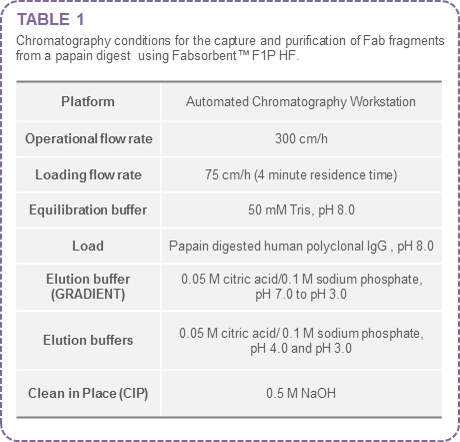 In this example both Fab and Fc fragments bind to Fabsorbent™ F1P HF when applied to the column at pH 8.0. An elution gradient from pH 7.0 to pH 3.0 indicates that the Fab fragments could be selectively recovered at ~ pH 3.7 (Figure 1). 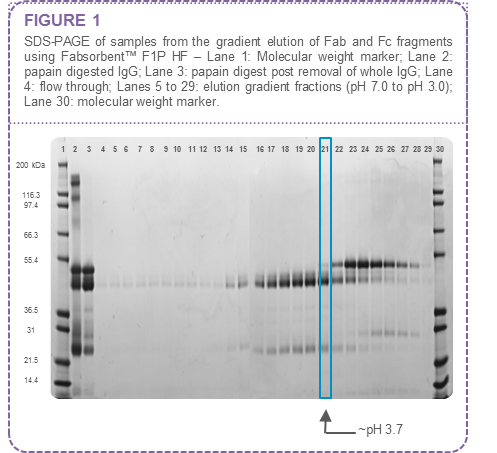 From the elution gradient data (pH 7.0 to pH 3.0) a step elution regime was identified for recovery of Fab fragments bound to Fabsorbent™ F1P HF. The Fab fragments were separated from Fc fragments using citrate/phosphate buffer at pH 4.0 (Figure 2). 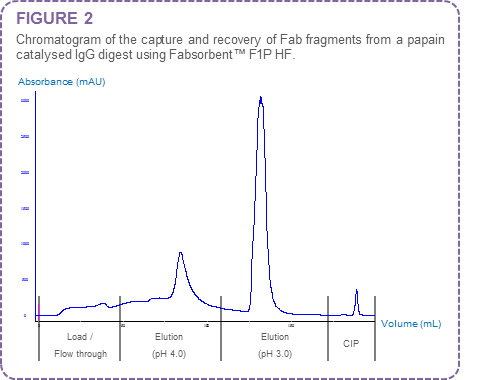 The Fab containing peak was identified by SDS-PAGE analysis of the chromatography fractions (Figure 3). 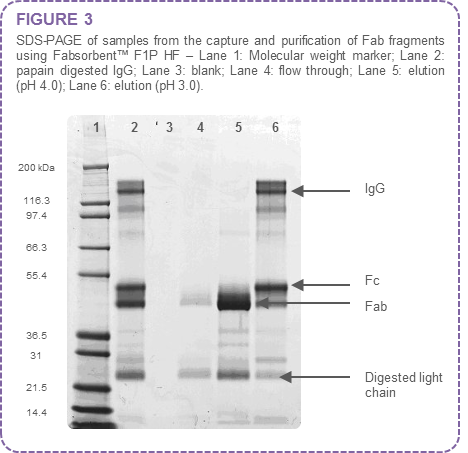 The results indicate that at pH 4.0 the Fab fragments are selectively eluted. Fc and whole molecule IgG co-elute at pH 3.0. 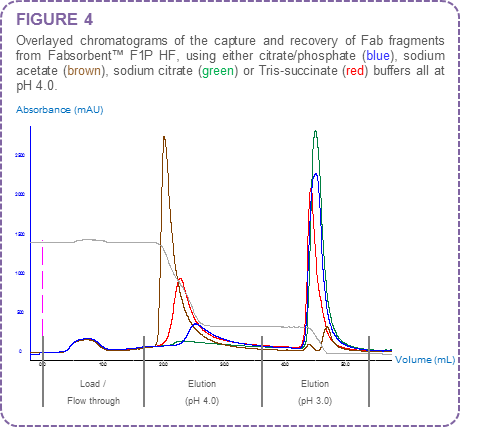 Figure 5 contains the SDS-PAGE for the various elution buffers tested at pH 4.0. 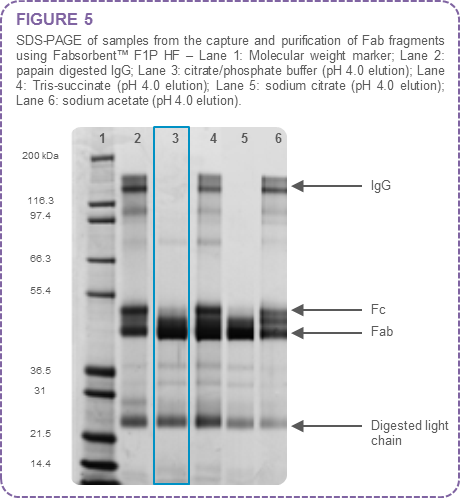 The results in Figure 5 indicate that the optimal buffer for elution of Fab fragments in this experiment was 0.05 M citric acid/0.1 M sodium phosphate, pH 4.0 (Lane 3).

In the case of Tris-succinate buffer at pH 4.0 both Fab and Fc fragments are eluted (Lane 4).

For sodium citrate elution buffer, Fab fragments are eluted at pH 4.0 (Lane 5), but recovery of Fab fragment is reduced.

Some free light chain is visible in all elution fractions as Fabsorbent™ F1P HF binds to both kappa and lambda light chain.

Fab fragments from a papain catalysed digest of IgG can be effectively captured and purified using Fabsorbent™ F1P HF.

In this example both Fab and Fc fragments were found to bind to Fabsorbent™ F1P HF. However, the fragments could be separated by selective elution at the appropriate pH and buffer.

The best elution buffer conditions for a particular Fab digest can be identified by performing a pH elution gradient from pH 7.0 to pH 3.0 over 20 column volumes.