Endotoxin or lipopolysaccharides (LPS) are highly toxic components of the outer cell membrane of Gram-negative bacteria. 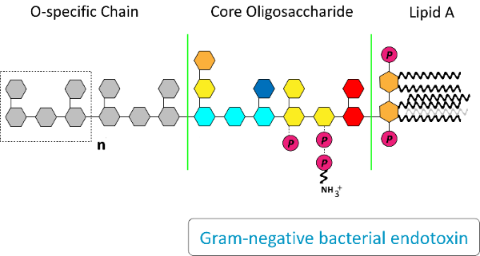 The general structure of all endotoxins is a polar polysaccharide chain, with three defined domains: the O-antigen region, a core oligosaccharide region and a Lipid A region. Endotoxins are often present in significant amounts in bacterial cell expression systems such as E. coli, which are widely used in the biotechnology industry for recombinant protein biotherapeutics where endotoxin contamination can occur at any point within the processes. Endotoxin contamination in protein biotherapeutic production processes generally occur when it is released from within the process or introduced by non-sterile process conditions. The removal of endotoxin is extremely important prior to administration into human and animal tissues/ bodies to avoid any adverse side effects, such as causing fever and shivering, hypotension, adult respiratory distress syndrome, disseminated intravascular coagulation and toxic shock.

Endotoxins are surprisingly difficult to remove as they interact with biomolecules containing positively charged and/ hydrophobic regions. A number of downstream methods have been used including ‘historic’ affinity ligands such as polymixin B and L-histidine as well as anion exchange chromatography and membranes. These methods can work effectively but have distinct limitations including toxicity, cost and non-selectivity. EtoxiClear™, One of Astrea Bioseparations' proprietary synthetic chemical ligand adsorbents has the ability to remove endotoxin to 0.1 EU/mg or less and has a binding capacity of >1,000,000 EU/mL adsorbent. As EtoxiClear™ is not ion-exchange based, endotoxins can be removed from proteins with wide range of isoelectric points (pI 5 to 11) in buffers ranging from pH 4.0 to pH 8.0. EtoxiClear™ has been shown to provide >3.4 log clearance of endotoxin from Fab fragments from an E. coli cell lysate, as well as from proteins such as IgG and HSA. 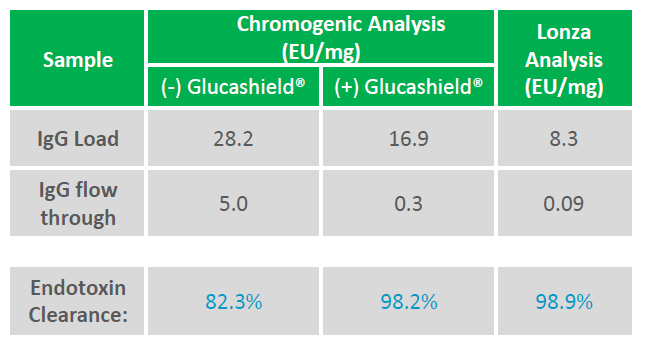 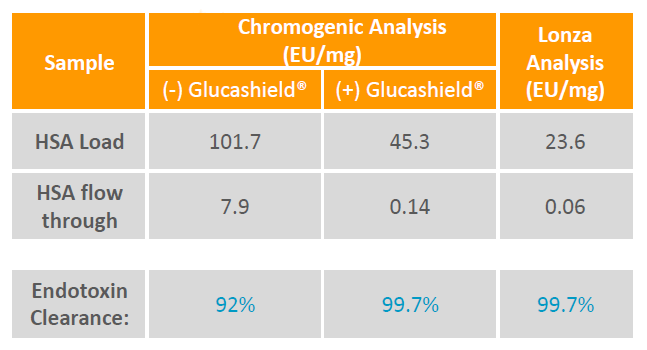 When testing processed samples using a LAL chromogenic kit, it is recommended to use Glucashield to remove β-D-Glucan interference which may artificially increase the signal. EtoxiClear™ is fully scalable and is shown to remove endotoxins from ~40 EU/mg down to <0.1 EU/mg (~3 log clearance) at a 5 mL pre-packed bench scale column as well as when packed in an 780 mL Evolve™ column.  EtoxiClear™ can also remove endotoxin from a range of buffer solutions including PBS and other balanced salt solutions used in cell culture.

In summary, there are several techniques available for the removal of endotoxin, but none are as selective, cost-effective, non-toxic and with the performance that EtoxiClear™ can provide.

Glucashield® is a registered trademark of Associates of Cape Cod.