Isoagglutinins are antibodies (IgM and IgG isotypes) which recognise and bind to type A or B blood group antigens. The presence of isoagglutinin antibodies in plasma-derived products (particularly plasma for transfusion and IVIG) can give rise to serious side effects, such as haemolysis, depending upon the type of isoagglutinin present (A or B) and the blood type of the recipient. Historically, individuals of AB blood type have been used as ‘Universal Plasma’ donors, as their plasma does not contain isoagglutinin antibodies. However, AB is the rarest blood group, possessed by a very low percentage of the population. Thus, AB plasma is in great demand and only available in limited quantities.

Astrea Bioseparations have developed two affinity chromatography adsorbents (IsoClear A™ & IsoClear B™) comprising of immobilized trisaccharide blood group antigens (A & B). These antigens are chemically synthesized and covalently attached to a bio-compatible polymethacrylate support matrix. IsoClear™ adsorbents are highly selective for the removal of isoagglutinin antibodies (IgM and IgG isotypes), enabling cost effective and efficient reduction of isoagglutinin titre for plasma and plasma derived products.

IsoClear A™ & IsoClear B™ are applicable to most blood derived compositions with excellent protein recovery including protective antibodies, coagulation and thrombotic factors. The adsorbents are easy to pack with excellent flow properties and are robust, long-life resins, capable of multiple cycles if the appropriate cleaning and sanitization solutions are used.
In this application note, appropriate cleaning and sanitization methods for IsoClear A™ & IsoClear B™ are investigated and described.

A scale-down reuse study was performed on an automated chromatography workstation using a 2 mL IsoClear B™ column challenged with 50 CV (100 mL) of plasma per cycle. Column cycling was continued for 50 cycles. The base-line chromatography conditions used are summarized in the table below: 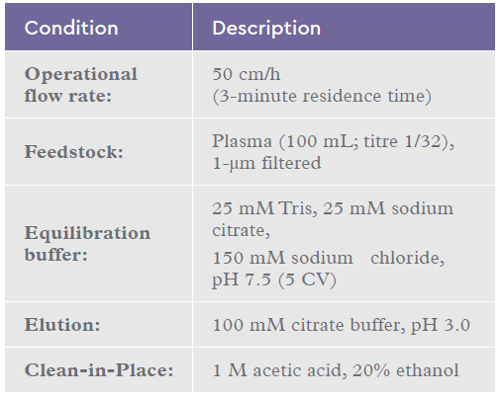 A wide range of conditions were investigated both in a 96-column PuraPlate™ format as well
as individual column format (data not shown). The final conditions identified a combination of denaturants and reducing agents which provided improved cleaning. 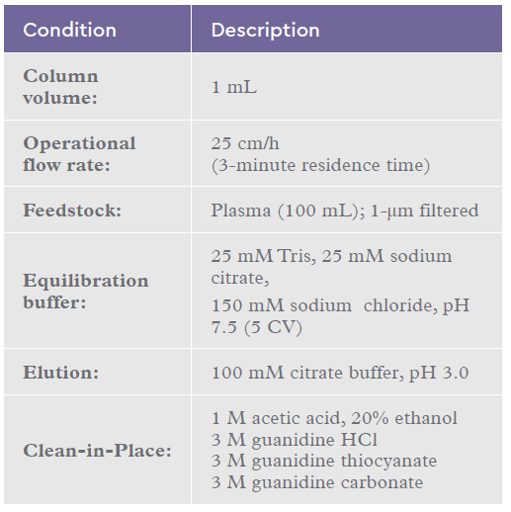 A study to investigate two different reducing agents (100 mM DTT versus 10 mM TCEP) was
performed with the result that the type of reducing agent did not appear to affect the performance of cleaning–in–place as long as the pH was mildly alkaline (data not shown). For CIP study 2, TCEP was selected as the thiol reducing agent. An investigation into varying levels of guanidine hydrochloride from 1 M to 6 M was carried out. 3.5 g of IsoClear™ was incubated (batch mode) for 1 hour with gentle mixing in 350 mL plasma. Post incubation, the resin was captured in a filter, washed with equilibration buffer and equally distributed into a 96-column PuraPlate™. The conditions for the study are highlighted in Table 3.

Table 3 : Chromatography conditions for the IsoClear™ B CIP study 2. 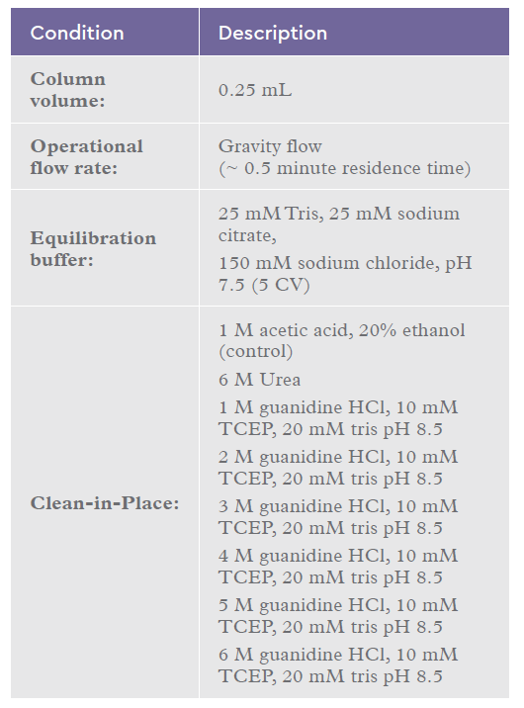 A scale-down reuse study was performed an automated chromatography workstation and a
2.3-mL IsoClear B™ column challenged with 15 mL of 0.1 M peracetic acid with a contact time of 20 minutes. The re-use study was continued for 50 cycles. The chromatography conditions are summarized in Table 4. 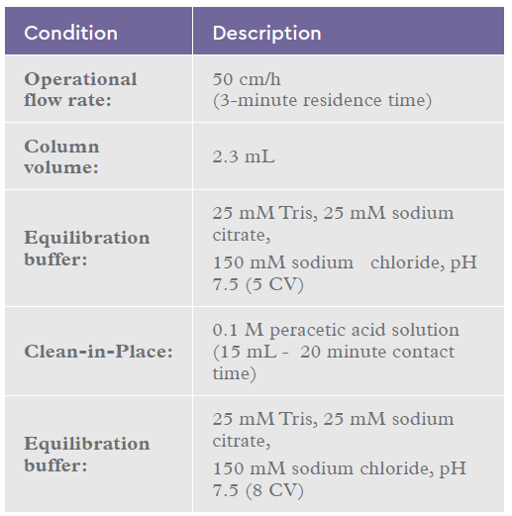 After 50 cycles of peracetic acid sanitisation, a 1-mL sample was removed from the column and analysed using a carbohydrate assay to determine ligand density. The remaining resin was repacked and challenged with 100 mL of 1-μm filtered plasma using the conditions set out in Table 2.

An incubation study was performed with different sanitizing solutions: PAB (120 mM phosphoric acid, 167 mM acetic acid, 2.2% benzyl alcohol, 0.2% N,N-Dimethyldodecylamine N-oxide (DDAO) as well as with 3 M guanidine hydrochloride, 100 mM DTT, 1 mM EDTA, 25
mM tris, pH 8.5. A slurry of IsoClear A™ was made and stored continuously for 4 weeks in the
stated solutions (roughly equivalent to > 150 cycles exposure with a 4-hour contact time per
cycle). The resin was washed and analysed using Astrea’s standard QC release test methods
including a ligand density assay and functionality assay (a static binding test identifying the
depletion of IgM isoagglutinins from a known level of a spiked solution (titre range: 1/256 to 1/512)).

A scale-down reuse study was performed on an automated chromatography workstation using a 2-mL IsoClear B™ column challenged with 50 CV (100 mL) of plasma per cycle. Column cycling was continued for over 15 cycles, using the optimized conditions highlighted from the CIP study. The chromatography conditions used are summarized in Table 5. 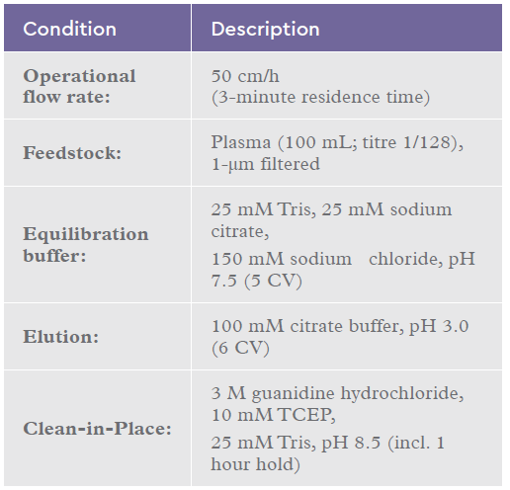 Process samples were analysed by Nephelometry and agglutination assay, and resin removed from the column to identify residual fouling on the column.

50 use cycles were successfully completed for IsoClear™ affinity resin. The chromatograms
(Figure 1) show typical profiles for a negative binding step with the majority of the plasma
proteins passing through the column and small elution and CIP peaks (containing isoagglutinins). The Load and Non-bound fractions were analysed using a modified Coombs test (Figure 2) demonstrating the clearance of isoagglutinins from 1/64 in the load to 1/2 in the non-bound fraction. This drop in titre is equivalent to ~ 97% removal of isoagglutinins. 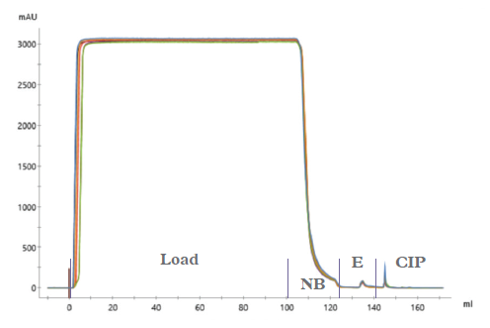 Figure 2: Modified Coombs agglutination assay of the Load and Non-bound samples from plasma using IsoClear B™. The load demonstrated a titre of 1/64 and the non-bound, a titre of 1/2. All samples were tested in duplicate. 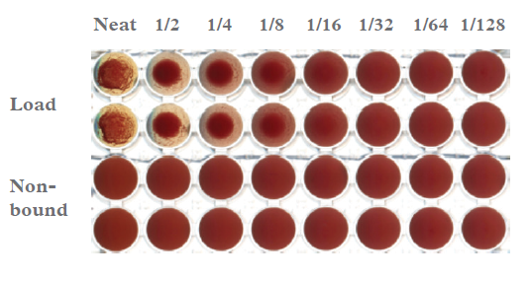 The majority of the CIP solutions tried did not have any significant effect on the cleanliness of the resin (data not shown). The investigation into different denaturants, in particular guanidine salts, showed a significant improvement in the removal of fouling from the resin compared to the baseline method (1 M acetic acid, 20% ethanol). 3 M solutions of guanidine hydrochloride, thiocyanate and carbonate in the presence of a reducing agent were used to clean plasma-fouled IsoClear™ resin (100 mM DTT, 1 mM EDTA, 20 mM Tris, pH 8.5) for 1 hour, followed by re-equilibration in starting buffer. Resin samples were removed from
the top of the column for SDS-PAGE analysis (Figure 3). 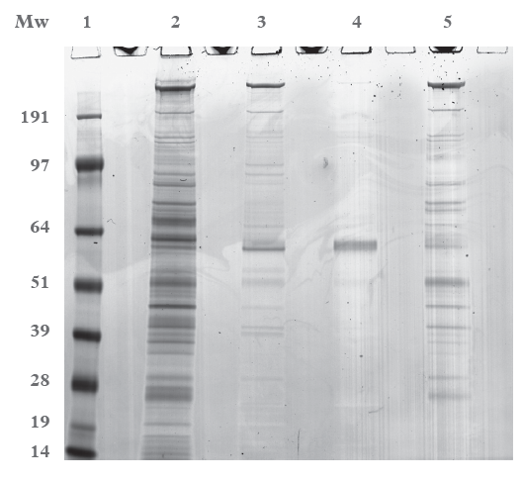 A study was performed to investigate 100 mM DTT versus 10 mM TCEP, both in the presence
of a denaturant. There was no significant observable difference between the two reducing agents (data not shown). From the first CIP study, guanidine HCl was selected as the most appropriate CIP solution. A range of solutions from 1 M to 6 M guanidine HCl (in the presence of  TCEP in a Tris buffer) were tested against fouled IsoClear™ in a PuraPlate format (along with 6 M urea and 20% ethanol, 1 M acetic acid as a control).

IsoClear™ samples from each CIP condition were subjected to reducing SDS-PAGE and analysed by densitometry to determine the extent of fouling removal.

The results shown in Figure 4 compare the level of residual adsorbent fouling, as well as the
percentage clearance of fouling in comparison to adsorbent which had not been subjected to a clean-in-place procedure.

Figure 4
Graph depicting the residual fouling of the resins after incubation of various CIP solutions.     1 M through to 6 M guanidine HCl (in 10 mM TCEP, 25 mM tris, pH 8.5 buffer), 6 M Urea and the control solution 1M acetic acid, 20% ethanol. The percentage clearance of foulants from the pre-CIP column is highlighted on the graph. 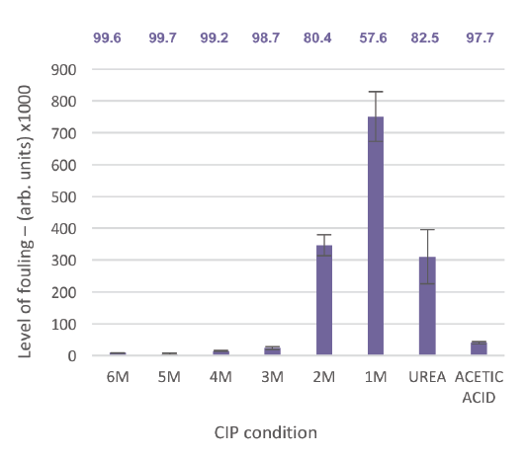 50 cycles were successfully performed on IsoClear B™ using 0.1 M peracetic acid (PAA).
Post 50 cycles, the resin was tested for ligand density and functionality. By carbohydrate assay, the ligand density was unchanged at 0.76 mg/mL (the QC release specification is > 0.6 mg/mL). To investigate functionality, a 1.3 mL column was packed, equilibrated and loaded with 80 CV of plasma with an isoagglutinin titre of 1/16. The non-bound fraction was tested using a modified Coombs test and no observable agglutination was detected, showing a successful depletion of isoagglutinins.

The stability of IsoClear A™ was investigated by incubating the resin for 4 weeks (> 670 hours) in various CIP and sanitization solutions. The incubated resin samples were rinsed and tested
using the specified QC release tests including bead integrity, ligand density testing and functionality testing.

Table 6
Summary results after 4 weeks continuous incubation of IsoClear A™ with CIP and
sanitization solutions. A starting time (t) = 0 time point was tested as a reference point. The
performance test is based on a IgM spike removal from solution with a titre between 1/256 and 1/512. 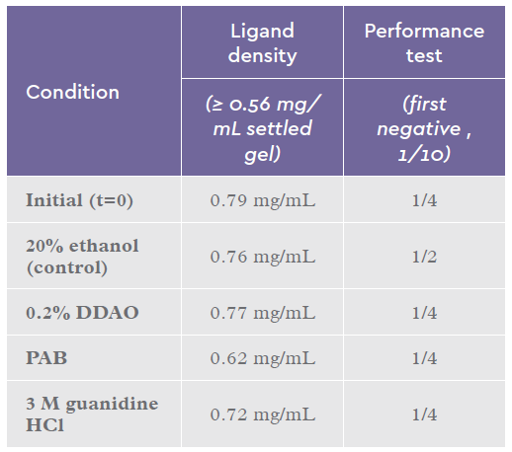 PAB showed no drop in performance after 4 weeks. There was an apparent drop in ligand
density (0.79 mg/ml vs 0.62 mg/ml) but this is still within the release specification for this product. The baseline CIP condition of 20% ethanol, 1 M acetic acid has been previously tested in a stability study and demonstrated no loss of performance (data not shown).

An IsoClear™ resin re-use study was carried out over 15 cycles using the optimized CIP procedure, in comparison to the baseline CIP conditions of 20% ethanol, 1 M acetic acid. The load and non-bound samples were analysed using a modified Coombs test method and a 6 titre clearance was observed from 1/128 to 1/2 or 98% clearance of isoagglutinins (data not shown).

Figure 5 demonstrates the chromatogram overlays for runs 1 and 15 for the optimized CIP
conditions, which shows close comparability between the runs. 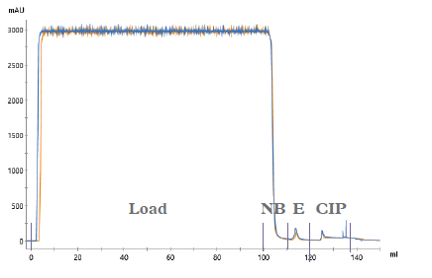 The optimized CIP condition, demonstrated improved cleaning efficacy in the removal of
residual fouling on the column, compared to the baseline CIP (as shown in Figure 3), which
allows for multiple cycles without affecting the performance of the resin.

IsoClear™ affinity adsorbents have been specifically designed for the capture and removal
of isoagglutinins from plasma and plasma derived feedstocks allowing for a 4 to 6 titre clearance (94% to 98% removal) from plasma. IsoClear™ is a robust, long-life resin, which can be used for multiple cycles using the appropriate CIP and sanitization solutions. 20% ethanol, 1 M acetic acid has been shown to allow IsoClear™ to be re-used for over 50 cycles, however, the extent of cleaning this solution provides is dependent on the feedstock.

Other CIP solutions such as denaturants in combination with reducing agents, in particular 3 M guanidine hydrochloride, 20 mM Tris, 10 mM TCEP, pH 8.5 has been found to be highly effective for cleaning IsoClear™ resins.

Sanitization, critical for bioprocess media, can be performed on IsoClear™ resins using a variety of sanitizing solutions including 0.2% N,NDimethyldodecylamine N-oxide (DDAO), 0.1 M peracetic acid (PAA) and 120 mM phosphoric acid, 167 mM acetic acid, 2.2% benzyl alcohol (PAB), which is an accepted sanitization solution for bioprocess media such as Protein A resins.

IsoClear™ resins are compatible with all of these solutions and are fully functional even after 4 weeks continuous incubation. This demonstrates the robustness of the IsoClear™ products and enables IsoClear™ resins to be used for multiple process cycles (> 50).

IsoClear™ resins have high binding capacities for isoagglutinins and can be used to remove A and B isoagglutinins from complex feedstocks (plasma and plasma derivatives). These resins can be used individually or as a combination of IsoClear A™and IsoClear B™, can be operated at plasma:resin ratios of up to 200 to 1 with very short residence times (≤ 3 minutes) and high flow rates (400 cm/h at 1 bar in a 10 cm diameter with a 12 cm bed height). As a result, IsoClear™ affinity adsorbents are perfectly suited to the production of universal plasma and for reducing the isoagglutinin titre of IVIG preparations.